Haiti, Into the Light

I am working on the picture book, chronicling my personal experiences in my recent trip to Haiti.  The working title is, “Haiti, Into the Light.”  I took over 1,600 photos and wrote pages of notes in preparation for the next phase of The Quench Project.   Here are are some opening notes, part of a rough draft for the book:

Here is a place of total chaos, abject poverty and an entitlement culture. But also it is a place of love and a passionate desire for light and a better life.  Like anywhere else, some people take great pride in their appearance, some work harder, are more industrious, smarter, and more loving than others. Each person in Haiti responds to the adversities and challenges in his or her own way.  Some with hope and joy and some with fear and suspicion.

I choose not to adhere to the “us versus them” scenario.  For me, the people I would encounter would not just be Haitians.  Nor would I just be an American.  One of my core beliefs is that we are all children of God, trying to find our way.  We must resist the temptation to judge.  My best hope is to discern and if we are luck, understand.

Even getting from the plane to the peaceful fortress that is the Watermissions headquarters turned out to be life changing.  I knew it would be crazy, a complete culture shock, overwhelming in its stark contrast to the corporate, antiseptic slickness of the world I knew.  But nothing could prepare me to just show up here and be thrown into this crushing mass of humanity.  I was speechless, which worked out fine, because far fewer people than I had been lead to expect, could actually understand English. 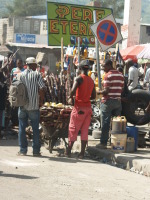 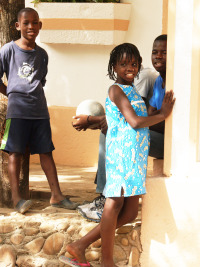 Even in the airport, the customs officials and others dressing themselves to look official, were fighting amongst themselves to do as little as possible for me in exchange for exorbitant tip amounts from unsuspecting mission workers and tourists like me, which if not given, might lead to a small riot.  My bag was chosen for inspection and I simply could not explain in Creole the nature of the electrical equipment I was transporting on behalf of my hosts.  I even had a letter from WMI but this didn’t seem to help.  Was I expected to bribe them?  I had no idea.

Finally getting through customs, I left the terminal, where throngs of Haitians clambered at the partitions as the savvier mission workers planted money like seeds into their beating palms, opened only long enough to take.

No less than five young men closed in on me as I tried to find my way to my hosts, who I assumed would be meeting me outside the terminal. I wasn’t sure how we would find one another, other than their noticing the conspicuousness of my white skin and my befuddled affect. These young men were shouting at each other in Creole, and at me, clearly desperate for their share of an American sized tip.

Thankfully, Aristeed, who I would learn is a hardworking, loyal engineer, trained in Haiti and working for WMI since before the quake, was there to scoop me out of the chaos with a comforting Watermissions International sign. What is the French word for water, again? I asked him to insist to these men that my $20 tip, be divided equally, imagining it might provide a meal for their families.

I felt guilty about the other thought that occurred to me in that moment, the one that was sure if Aristeed had not been there, for any number of good reasons, I would have surely died.  It was the voice of fear, the one that wanted to separate me from the moment.   I decided instead to simply pay attention to the many voices I would hear, both in my head and from the people and experiences in this strange new land, and learn what I could about myself, as well as Haiti.  I’ve told my kids a hundred times, “fear is only the beginning. Bravery is where the goodies are.” 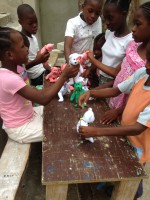 I placed myself into the trust of my hosts.  I also decided to take the advice of Pastor Todd Simonis, back home at my beloved City Church, who suggested I simply walk alongside Jesus and let Him lead the way.

The quake took WMI from an operation of three to 36.  Over 300 water filtration systems and thousands of single molded latrines, designed by WMI engineers for quick installation and years of reliable service, pepper the land from hell.