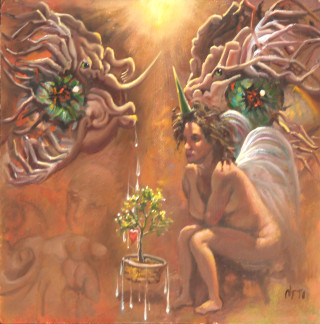 Armageddon and the Ascent of Trump

This is the nightmare I had last night (December 14, 2016). It followed the path we are currently on to its inevitable conclusion.  In my dream, Donald Trump has captured the Presidency, the proud leader of the most powerful nation on Earth. He has been swept into power by people who were fed up with establishment politics, who feared they were losing their way of life. Riding his wave of popularity, the GOP also captures the house and the Senate. With his landslide defeat over the befuddled Democrats he takes bold action with in response to the powerful mandate from the people. He builds his wall along the border, deports the illegals, bars all Muslims. He mounts his very practical, common sense, business-like campaign against terrorists, illegals, the liberal media, militant blacks, non-Christians and others who threaten the American way of life.

He also launches several military incursions in the Middle East to “take the oil” (“it will be easy”),  and make them think twice about attacking America again. People admire his strength and resolve. Although he is quickly able to neutralize their military capability, he has provoked such an escalation of hatred toward America that the percentage of radicalized Muslims and their sympathizers grows exponentially. Instead of thousands, it is now millions. By the time Trump “takes back America” he has mobilized millions of people around the world who are committed to stopping us at all costs, by any means necessary. In response to the inevitably violent world-wide response, he is forced to declare Marshal Law, in the name of national security. Patriotic Americans are now expected to rise to the occasion, to protect and defend our country and our way of life. The draft is reinstated in response to massive terrorist activities against Americans, as thousands of U.S. soldiers sacrifice their lives for their country.

Meanwhile, most of our citizens will have become so debilitated, economically disenfranchised, perhaps even shut-out of the economy altogether, that they will be forced underground. If you are unwilling to prove your allegiance to America, you will not be allowed access to the new monetary structure. What structure is that you ask? Oh, its really cool; there is this really awesome micro chip that will be placed in the palm of your hand or forehead. Easy access to services which were once part of the social contract, like fire and police protection, social security, health insurance, education, fresh water, banking and shopping will no longer be available to you unless you have the chip, available only to carefully vetted patriots. Most of these services will by now have become completely privatized; they will be reserved only for those loyal to American principals, like freedom and justice. The minimum wage and unions will be a thing of the past. If your credit rating or other bad marks against you, disqualify you, you will simply be on your own. There will no longer be any lazy people living off the taxes of hard-working Americans in a Trump Presidency.

Unable to organize, shut out of the economy, systematically oppressed, the disenfranchised will become revolutionaries, counter-insurgents, home-grown terrorists, who must be eradicated because they are a clear and present danger to national security. Protesters will have their citizenship revoked. Opponents will be jailed. These men and women will be driven underground, joining with their traditional as well as new allies across the globe, with whom they will communicate through social media, despite Trump’s best efforts to get Bill Gates to shut it down. Many Christians, who believe in compassion and in helping the less fortunate, along with representatives from many other faiths, will secretly reach out to those in need. But there will be too much suffering for anyone to effectively deal with. Most will simply turn their backs and thank God its not them.

Yet the loyalty of Trump’s followers will only increase, as he rewards the super rich with fiscal incentives, assuring the rest of us that one day their share of the pie will eventually trickle down to them. They continue, affectionately, to make light of his forthright, though quaintly harsh, assessment of the dangers posed by those “un-American” among us. Trump will command with great strength and certainty. His secret weapon will still be that he never questions himself, a quality seen by many as admirable in a leader, a quality the country had done without for many years. He surrounds himself with the “best people.” As promised, he appoints Sarah Palin to his cabinet and himself as his own foreign affairs advisor. Sure, everyone knew going in, he was an opportunist, a complete narcissist. “I’m smarter than everybody,” he’d often say, matter-of-factly, with his cute little smirk. And we will wonder how so many people gleefully placed their fate in the hands of this disarmingly entertaining individual, almost out of curiosity. Their reason: if only they allowed this “fabulously successful” man to pursue his own self interests, that their self interests might also be served.

Meanwhile, those few vagabonds, driven underground, who had seen him for what he was, a power hungry blowhard, are now simply traitors, even terrorists. And yet, these freighted masses, along with a few others who are beginning to awaken to his insane vision for America, are beginning to evoke the sympathies of their former allies across the globe. They begin to reach out to America’s traditional allies as well as its former enemies, who’s numbers have grown exponentially now that their suspicions about American imperialism and oppression have been proven right, after all.  They will use social media, despite Trump’s continued efforts to shut off the internet in the name of national security, to get their message through.

Trump still isn’t bothered by the growing comparisons to Hitler because his study of World War II is on a par with his reading of the Bible. He firmly believes what he doesn’t know can’t possibly hurt him, the perfect leader for a society which has nothing but contempt for people too smart for their own britches.

Unlike Hitler, however, Trump will be in command of the most powerful force the world has ever known. Our worst fears about our enemies’ desire to destroy us will finally be vindicated. America will be threatened from every direction. As a result, the people will cry out even louder for Trump’s strong leadership, to save them from destruction.  He will be given unprecedented executive powers. He will win a second term, if we make it that far.  With the help of a well-regulated militia and a heavily militarized police force he and his loyal followers will “protect our streets,” backed up by the full force of our military establishment. With Martial law in place, he will suspend voting, curtail the legislative and judicial branches, in order to maintain order against the hordes bent on toppling America. Some will feel compelled to try in vein to stop this megalomaniac. Patriotic Americans, flag waving Christians, who supported his cause will now be dependent on him for the comforts they hoped to one day earn by supporting the continued redistribution of wealth they will never actually see. They will have no other choice but to support Trump as their supreme leader, in order to maintain access to basic goods sand services. He alone will be their only hope, as they chant, “down with the poor and the weak, the PC propagandists, those bleeding heart liberals.” Those “lazy bums” will finally get what they deserve. Good Christian patriots, who supported his assent, will gleefully follow his holy cause to the end of the Earth.

At great cost, Hitler was stopped by good men and woman rising up against a bully who ultimately never really had a chance against a world standing tall against a petty tyrant. They held firmly to their values about freedom and equality. Those people will more easily be swept aside this time. Hitler was merely Trump’s warm up act.

Nations will align forces against America, but they will not prevail against the world’s only superpower. Nuclear war will be the only option. In a short time this world war will escalate until it becomes evident that the only force capable of stopping this beast will be God himself. And this is how Armageddon will come about.

How deeply ironic, and sad, that the Christian Right will have been the very ones leading us into destruction. Will it be because, unconsciously, they desired to force God’s hand, tired of waiting for their long awaited vindication, blinded by their own self-righteousness? Will they understand the irony and hypocrisy of their actions, aligning themselves with the Anti-Christ, while evoking the name of God, as they assert themselves as the exclusive recipients of His grace?

Some will realize in time, the error of their ways. They will repent before it is too late. But how surprised many will be when they are not among the missing, the raptured few. They will forge on anyway, bloody but unbowed, still evoking God’s name, convinced they are in the right. Their souls will be so black by then, consumed by their fears and pseudo-righteous cause, that they will raise hell for another thousand years, until they are thrown, once and for all, into the lake of fire, forever. Amen.

And then I woke up, not sure, as a Christian, whether I should just sit back and watch this terrible scenario play itself out or whether I should try to warn people. What if this is indeed God’s plan for the world? No one knows for sure, not even the prophets.  Since no one can see into the future, is it possible God wants us to stand up against tyranny, whenever and wherever it rears its ugly head? Or do we face the slaughter as lambs, with open arms?

As a Christian, I don’t believe it is up to me to force the hand of God. So I will pray. I will speak out as I am led, I will vote, while I can. All I know for sure is it is all in God’s hands. And in that knowledge I will rest.