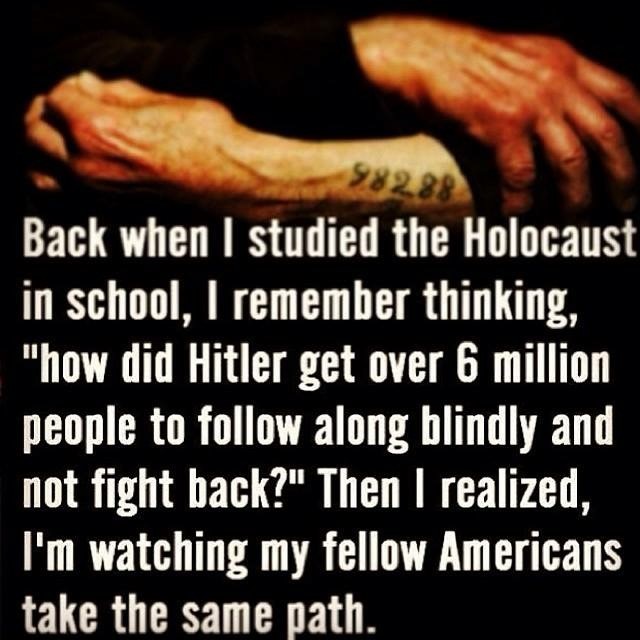 This meme has been widely circulated on Social Media lately. It is an excellent example of how certain elements of our society are combining facts, half-truths and double-speak to take control of a poorly educated populace, not trained to think critically.

A friend posted this on his wall recently, explaining he was concerned about “the U.S.’s tepid stance on ISIS.”

The meme was attached to a website called, “worldtruth.tv.”  On the site are a lot of unnerving articles, like, “The six alien species who are fighting for control of Earth,” along with a lot of conspiracy theories, suggesting big scary stuff is going to happen unless we get really upset.  I’m sure its a very nice website.  And I’m not here to question the veracity of their journalism.  Nor do I want to argue about what the U.S. should be doing about the Isis threat.

A militant stance toward Isis, however, would be the more likely equivalent to what Hitler perpetrated against Poland, Czechoslovakia, etc. He believed they were evil and must be destroyed, along with the Jews and gays and the “weak.” If elected, it wouldn’t be long before any of the 19 NeoCon Republican presidential contenders dragged us into world war III, with plenty of scapegoats being attacked along the way. That’s the only parallel to Hitler that makes any sense. Hitler used hatred and anger toward scapegoats to justify atrocities on minority, vulnerable populations. Hating on blacks, gays, immigrants, Muslims is the path toward Hitler style fascism.

But I am fascinated at the unlikely combination of words and images our clever meme creator used to further the Neo-Con’s goal of generating fear and chaos to advance war as the best solution to the problems we face in the world.

But first, back to my FB friend, who is a great guy, BTW.  I clarified with him, “Is it possible you may be confusing Hitler with Lord Chamberlain of England, who arguably waited too long to stop the Nazi advance?”

This meme is a very clever example of the expert use of double-speak.  The memest makes the reference to the Holocaust and the 6 million “followers” as an example of what will happen to us if we don’t use aggressive military action to stop Isis, or whatever we believe is threatening us.

But wait a minute.  The Jews were not followers of the Nazi’s.  They were passive resisters, in that they did not fight against the oppression, captivity and mass slaughter perpetrated upon them.  In fact, they were victims of the totalitarian Nazi regime, never its followers.

See how the creator of this meme has subtly switched the roles of Hitler with Chamberlain, two men who couldn’t be more diametrically opposed?  The meme’s propagandist, through subtle inference, was somehow able to connect, in fact switch, the identities of the ineffectual pacifist (Chamberlain) with the crazed dictator (Hitler).  Not bad for a simple FB post.

But wait, there’s more.  Notice also, in the photo he used of a very muscular “follower,” as if to suggest “we” are actually really strong, just as Hitler reasoned to the Germans, and should not allow these “evil” people, which I presume are the Jews, the gays, the blacks, the immigrants, the “weak,” FILL IN THE BLANK, to manipulate us into submissively following or supporting them.  This meme creator turns the tables on us, without our even being aware he/she is doing it.  Context is everything.  This piece of propaganda is as brilliant as it is frightening.

If anything, as I’ve watched the enlightened people of color in Charleston, forgiving the killer, engaging in loving, peaceful demonstrations, it reminds me more of the kind of non-violent resistance to which the quote almost seems to be referring.

The “oppressed” here though, are “us strong, white folks, who need to stand up for our heritage, our honor, our country, our pure traditional values,” to use some of the common buzz words.  The “oppressors” are “all those politically correct Liberals, those non-Christians, those blacks, those gays, those intellectuals, who are usurping the majority’s natural rights.”  The quote is worded very ambiguously and one could argue that it could be applied in any number of situations, in case anyone were to call them on it.  Well, someone just did.

So let’s cut the crap and call it what it is.  This meme is an excellent example of Orwelian-style double-speak, in the way it cleverly and subtly combines emotionally charged facts and interweaves it with misinformation to reach its dark conclusion (double-speak). It is designed to get people upset by making them feel they are being led to the slaughter, without identifying the “leaders” by name, or the nature of the “slaughter.”  “You know who they are,” it seems to be saying to us.

This is how fascism gets control of a complacent population, which we are, through inference and suggestion, using our worst fears, in this case a totalitarian dictatorship, to draw us closer to that very thing we fear.  It’s cunning and brilliant.  And it’s just one of thousands of carefully crafted bits of media, sound bubbles, memes, floating around, instilling fear and anger, without providing any real solutions.  Those will come later, when we are all in line, marching blithely, joyfully, into the next strong man’s evil twisted plot.

Oh yeah, what does this have to do with art, as this is actually an arts blog?  Well, I like to think of artists as little mini propagandists.  We combine images and words and colors, our media, to convey certain human truths.  Our job is to make people think.  I say we’re mini propagandists because our goal is not to control and manipulate, but to enlighten.

Ambiguity, which this meme encapsulates brilliantly, must be present, in order for the message to reach the subconscious mind.  When this become a predatory exercise, than we have moved from the realm of an artist into that of a propagandist.  Developing mindfulness, having a point of view, as all artists must, should not be confused with predatory mind control practices of the propagandist.