More rough draft from my journal in Haiti. . .

I was in lock down at the Watermission compound in Porta Prince for the weekend so I decided to make the best use of time by painting a 12′ mural knockoff of da Vinci’s The Last Supper (slightly less than actual size) on the headquarters main wall.

It is a celebration of Christ’s sacrifice and to the painstaking work of Water Mission, now part of The Quench Project, in the hopes of inspiring others to dedicate their talents to making the world a more compassionate and peaceful place.

I’m one of those Christians who is uncomfortable proselytizing, so I prefer to let my actions speak for me. I attend weekly JA (Jesus Anonymous) meetings on Sunday mornings, which is helping with that problem. I like the idea of performing my art as a form of worship and as a way to convey the pure Christian message of peace and connection.

I accomplished The Last Supper in one weekend simply by giving myself over to the Holy Spirit.  I was careful not to turn it into a dare, calling on God to “show himself” through a miracle (I’m working on that as well).  Instead, I had to humble myself, knowing that I could never recreate this masterpiece in any edifying way without some Holy intervention.  I knew doing so on my own would be fool-hearty at best.  This was truly a leap of faith. 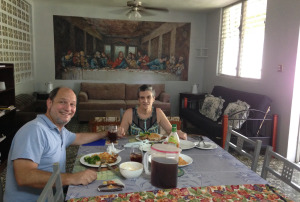 I allowed it to be a meditation on the moment when Christ introduced Communion for the first time.  I also wanted to channel DaVinci and understand who these people were as he saw them in his time.  I saw the Fresco in person back in 2001 but used an I-pad to bring me closer to the original image.

I gave myself over to Jesus and the work He accomplished through DaVinci.   I made no attempt to alter the original in any way, although clearly, through the process of recreation, it has been altered. I learned a few things I didn’t know. For one, there is a demon perched on Judas’s shoulder, which was very eery for me to paint.  I meditated on the role Judas played in the miracle and how Jesus forgave even he who would betray him.  Also that there are no glasses of wine in the painting.  The controversy over whether Young John was really Mary Magdoline will have to remain a mystery.  He looks like a woman to me, so that’s how I painted him, but it’s not really my affair to make that determination, as the artist.

overwhelmed with where to begin.

I experienced something truly miraculous during the process, however, that I must report.  I honestly felt the hand of God guiding my hand. Making endless adjustments unconsciously, not aware of what effect it might have in the final work. It was a leap of faith on many levels. The mathematics and geometry were way way beyond my ability. I honestly don’t know how I did it; I was profoundly moved by the experience.

I did have a chance to talk about the face of Jesus during our devotional service on Monday morning. I explained to the 25 WM employees who regularly hold morning devotional services, that the Jesus in this painting could have been, and in fact is, the face each of us sees in the mirror. It is also the face we see in a mountain, in a broken home, a rabid dog, indeed wherever we look. Because God is everywhere. He could be Chinese or Pekinese. The face in DaVinci’s painting is only one depiction, just one of the billions of the manifestations of who God is, if we choose to see Him.